The Roots of European Civilization (Roma) by Jose Ferreiro 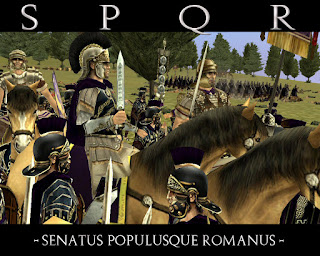 Roma according to the legend was founded by Romulus.
Romulus and Remus were the twins from "Rhéa Sivia" and Mars. Rhéa Silvia was the unique daughter of King Numitor (Albe-la-Longue).
When Amulius took over his brother Numitor. Amulius obliged Rhéa Silvia to become a priestess. He intended by doing to ensure that he will not have any direct descendant to claim to the throne.

But Mars, the king of war charmed Rhéa Silvia and she gave birth to twins (Remus and Romulus). Amelius ordered his servants to kill the new borns. However the servants just thrown away the new borns in a cradle in the Tibre river.  The cradle went away in the river and it stopped by a side of the river far away. A female wolf nursed the twins.
Later a shepherd named Faustulus discovered them in the wolf’s den. Faustulus took them to his home. Romulus and Remus were raised as shepherds but soon their abilities to lead and fight became famous.

One day Numitor found Remus and understood who he was. At this point of time the family was united again. Nevertheless both brothers could not settle for living in “Albe-la-Longue”. Romulus and Remus left to found their own city. However, a fight would break out between the twins. They agreed to establish their city on the same place they were found and rescued. The exact place was not clear in their minds. They decided to question the omens.  Romulus stand up on Palatin and Remus over the Aventin. The city will be setup where the omens will the most favorable. Remus saw first six vultures. On the other hand Romulus saw twelve. The sky decided in favour of Palatine, thus Romulus.

Romulus proceeded to draw the walls of his city. The wall was a simple ditch dug drawn by two oxen. Remus, disappointed not to have been favoured by heaven, laughed at this place. He could easily pass it with a jump.
He went inside the drawn perimeter by his brother (Romulus).

The latter, angered by seeing this sacrilege, drew his sword and killed instantaneously Remus (Dignitas).

Why did I write all this story? So simple, it is to show the values of the root of the European civilisation.

The roman virtues are shown next and they illustrate the roots of the European Civilization (romano germanic).
About the Author
Jose Ferreiro is an entrepreneur and a performer with a passion for working to make this world a better place!

Posted by Jose Ferreiro at 2:23 PM No comments: