There is a fascinating 19th century science experiment.  As the story goes, researchers found that when they put a frog in a pan of boiling water, the frog just quickly jumped out.  On the other hand, when they put a frog in cold water and put the water to boil over time, the frog just boiled to death.  The hypothesis is that the change in temperature is so gradual, the frog does not realize it’s boiling to death. While the results of the experiment are in question it is a good metaphor for organization cultures.

Indeed, many organisations/companies are unable to see the changes they are affecting them around, specially by competitors and when they do it is usually too late. The business has being highly impacted.

Sources:
Wikipedia: The Boiling Frog
Youtube Video Experiment (used image for this article is a capture from the YouTube Video)
Posted by Jose Ferreiro at 10:06 AM No comments: 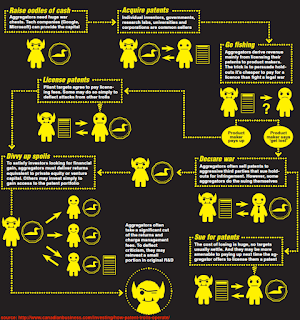 I heard from the first time about this term “Patent troll” at a conference about competitive intelligence in Paris.
Indeed patents are often used as a PKI in different companies to illustrate their capacity to innovate or about the “status of art” within their R&D department.

Pattent trolling describes people or companies that misuse patents as a business strategy to weak its competitors by the use of third parties. Such a company (or third party) can then launch lawsuits against infringing, or simply hold the patent without planning to practise the idea in an attempt to keep other companies productivity at a standstill. It is even often the case that the company that has been attacked is obliged to put on the table confidential information in front of a judge. All this goes well when you are at the level of a unique country.
However, things become more complex when those information must be supplied to foreign countries where the impartiality/corruption might be at stake.

Read another interesting articles from:
About the Author
Jose Ferreiro is an entrepreneur and a performer with a passion for working to make this world a better place!
Posted by Jose Ferreiro at 6:13 AM No comments: